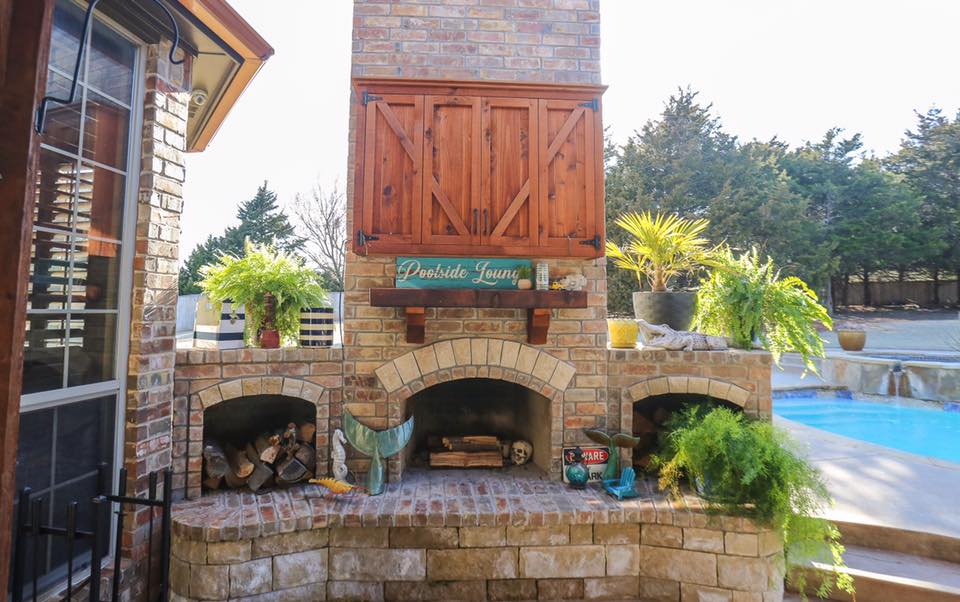 My second trip to Tulsa to take finished project photos included just one appointment with one customer. The appointment was at the end of the day, so I was able to take my time without being rushed to get back for any other appointments or meetings.

When I arrived, the entire family of four greeted me at the door. The husband and wife and their two young children—a boy and a girl.
They walked me around to their backyard and showed me everything that PMH had done to create their outdoor living space. A pergola, an outdoor rated TV cabinet, and concrete expansion around their existing swimming pool.

They were all very excited about the projects and had been using and enjoying them a lot already. I could tell that they were lonely from being sheltered in place for several weeks due to the pandemic, because they talked my ear off for over an hour. I did not mind it, though. They were so nice, and it made my trip up there worthwhile; and it gave me a break since I was going to be driving two hours back to my house afterward, after having driven almost that long to get there. I do not mind the drive, and the weather was nice for the visit and the photos.

Their home backed up against a large, expansive wooded area with a nice stream going through it. I commented on it, and they said that the man that owns that land offered to sell portions of it to each person in the neighborhood whose home backed up to it, but it was under the condition that everyone participated and bought their portion. They were so interested that they offered to buy their portion, as well as their neighbors on either side to help make it happen. The father said that he and his kids love to walk around and explore the area and look for wildlife and sit and watch their favorite shows on their outdoor rated TV cabinet. That is when the mom mentioned that they have a lot of raccoons around. She said that for a while she thought that her next door neighbors were taking their trash out at three o’clock every morning—which she thought seemed really odd, so one night when she heard them, she got out to bed to watch, and it turned out it was raccoons! She said that her young husband was sick in bed with Cancer the year before, and she was responsible for taking care of the inside and outside of the house, and one night she took the trash out and when she opened the lid, there was a family of raccoons sitting inside looking up at her!

The father told a story about the elderly lady who lives next door that called him one day because she noticed a rabid raccoon laying on her back patio. He said that he would help put it out of its suffering, but legally he could not shoot it, so he would have to whack it over the head. He asked her if she had called animal control, and she said that she had not. She called them, and a guy came out and charged her sixty dollars to safely and humanely remove it from her property. She happily paid it, and he said that he also happily contributed twenty dollars so that his kids did not have to watch him kill a raccoon. He said that in the short amount of time it was there, his daughter had named it. Instead, they got to see it get rescued and taken to safety before they went back to watching cartoons on the swivel mount television inside their outdoor rated TV cabinet.

Both parents had many other similar stories, but the sun was going to be going down soon, so I started taking photos. I photographed the concrete surrounding their swimming pool, which had beautiful reflections of the trees in the water, and the half pergola with the sunset’s beams shining through. The pergola was tied into the roof next to a very prominent and decorative OSU sign. Then I photographed their outdoor rated TV cabinet. It was custom built to hang on the brick wall under the pergola. Based on the sign I just mentioned, they will probably be watching a lot of OSU football games on the television that is mounted inside their outdoor rated TV cabinet.

The husband said that he would be happy to do the thirty-second video review, and he said a lot of nice things about working with PMH and how much he likes the project itself. He said that his home office, where he has been working since the pandemic hit, has a great view of the pergola, so he gets to look at it all day before coming out in the evening to sit underneath it while watching the news on the television inside his outdoor rated TV cabinet.
PMH prepared a space in the yard, next to the swimming pool where they planned to have a fire pit designed, built, and installed, but they held off on that part of the project. The father did point out a few areas of concern, but nothing major, and he expressed his overall happiness and satisfaction with the project, despite a few issues that occurred before, during, and after the project was complete.
I really enjoyed meeting and working with this Tulsa family during their final project photos appointment.