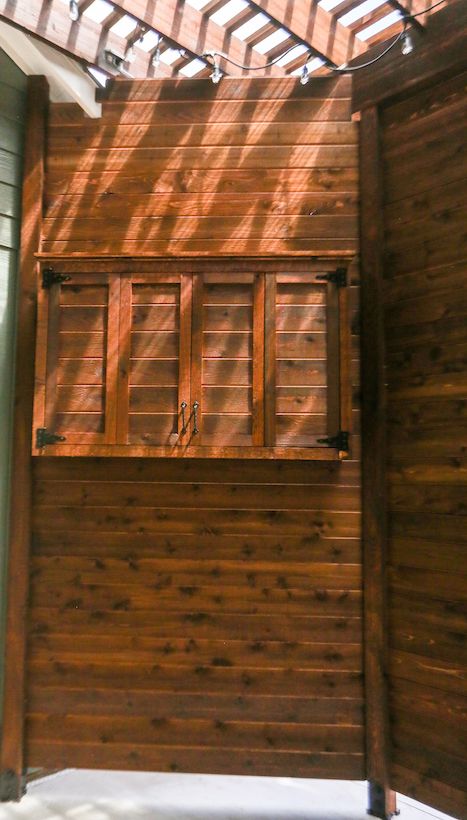 Investing in an outdoor cedar outdoor TV cabinet should be an easy decision to make because there are so many benefits to having one outside on the patio in your backyard’s outdoor living space. Whether you decide to mount it to the brick wall on the back of your house, or onto an outdoor fireplace, above the mantel, or on a privacy wall, buying one is the easy part. Deciding where to put it is the most difficult decision.

Patio Galaxy makes an outdoor TV cabinet that is very decorative. It is made from western red cedar and comes with beautiful hardware. When it is closed, it can stand out as the focal point of your outdoor living space or stained to blend into your privacy wall. The outdoor TV cabinet that Patio Galaxy makes is also weatherproof with its tongue and groove method of construction and bi-folding doors. They are handcrafted to keep the moisture and the dirt out of the inside and off your television.

One of the other functional parts of the outdoor television enclosure box that Patio Galaxy makes is that they include a place in the bottom, below where the television is mounted, to place and to hide remote controls, cable boxes, video game consoles and soundbars. You can even put batteries and cords and any other items that you have laying around your outdoor living space that you want to keep hidden as well as safe and dry and clean. The obvious reason to buy a cedar outdoor television enclosure from Patio Galaxy is so that you can watch television outside. Whether it is a favorite sporting event, team, or movie night with the family, anything you normally watch inside, you can now watch outside when the weather is nice. If you hang it on the outdoor fireplace, you will stay warm while watching television even if it is cold outside.

You will save money if you choose to purchase an outdoor television box from Patio Galaxy instead of trying to make one yourself.
The top and the sides of the cedar enclosure will also keep the glare off the television, which would not be the case if it was not enclosed in a box. If you decide to install a swivel mount bracket to make your television pop out and swivel around outside the box, it may end up with some glare, but that is also the beauty of having it in an enclosure, because you can move it around to take the glare off.
You will also save time by buying an enclosure instead of trying to build one yourself. Patio Galaxy has a team of professional carpenters who work full time handcrafting and building each outdoor television enclosure so that they have learned to perfect it over the years. The first few were trials, and now they have worked out all the kinks so that they last a lifetime.

The workmanship comes with a one-year warranty, so anything that goes wrong with the actual structure of the build of the cabinet will be covered, but with the strong magnets that keep the doors closed, and the hook and chain latches that keep the doors open are made securely enough that Patio Galaxy has not had any issues. Call Patio Galaxy today to order your television enclosure or shop online through their website. You can also purchase one in person at their eighteen thousand square foot showroom. They have several on display that you can look at, and you can choose your stain color while you are there.

You can pick from several different sizes, styles, and stain colors to fit a television up to a seventy-five inch. These are perfect for gifts for the person who has everything. They will get years of enjoyment out of them. Patio Galaxy also makes similar cabinets that are modified to be used as wine cabinets that hold bottles of wine and wine glasses with and without the stem. They also make a pool cabinet that can hold beach towels, sunscreen, sunglasses, and any other pool supplies that you would like to place inside.